Study Project
Applied skills and tools:
Conception / Print / Adobe CC
For dropouts from the right-wing scene, it is hard to become fully detached and, in order to achieve it, support and consultation are required. Those people wish for a new beginning far from inhuman actions and attitude. Beside mental change, most of them carry tattoos of punishable symbols which cannot easily be removed. Besides tattoo removals, which can be expensive and painful, cover-up is also an option.
"Exempted Memorials" is a booklet with tattoo cover-up suggestions and interpretations of the symbols' original meaning. The goal is to turn the negative connotation into a positive one. These suggestions are meant to be an orientation for possible cover-ups and can be adapted individually. 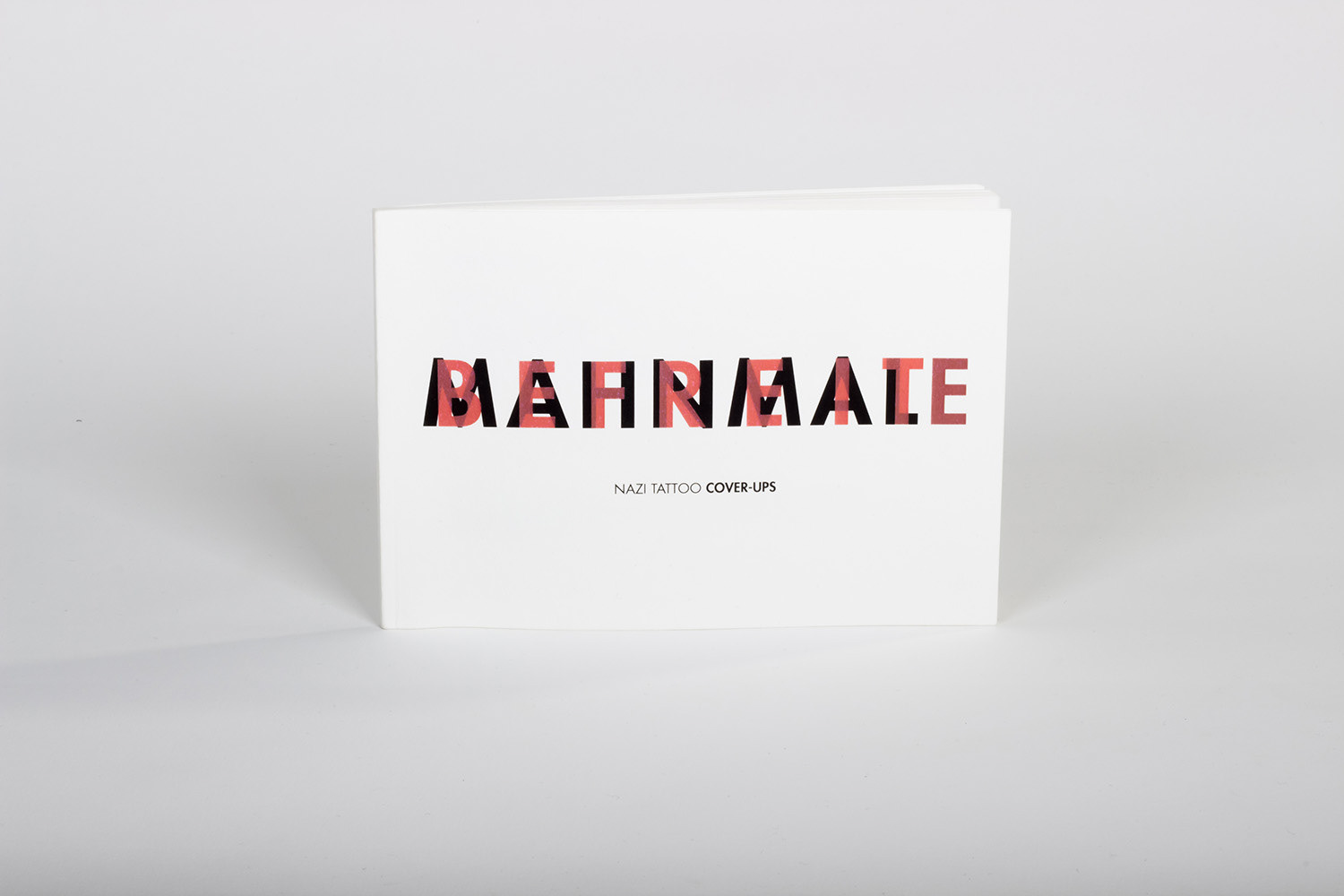 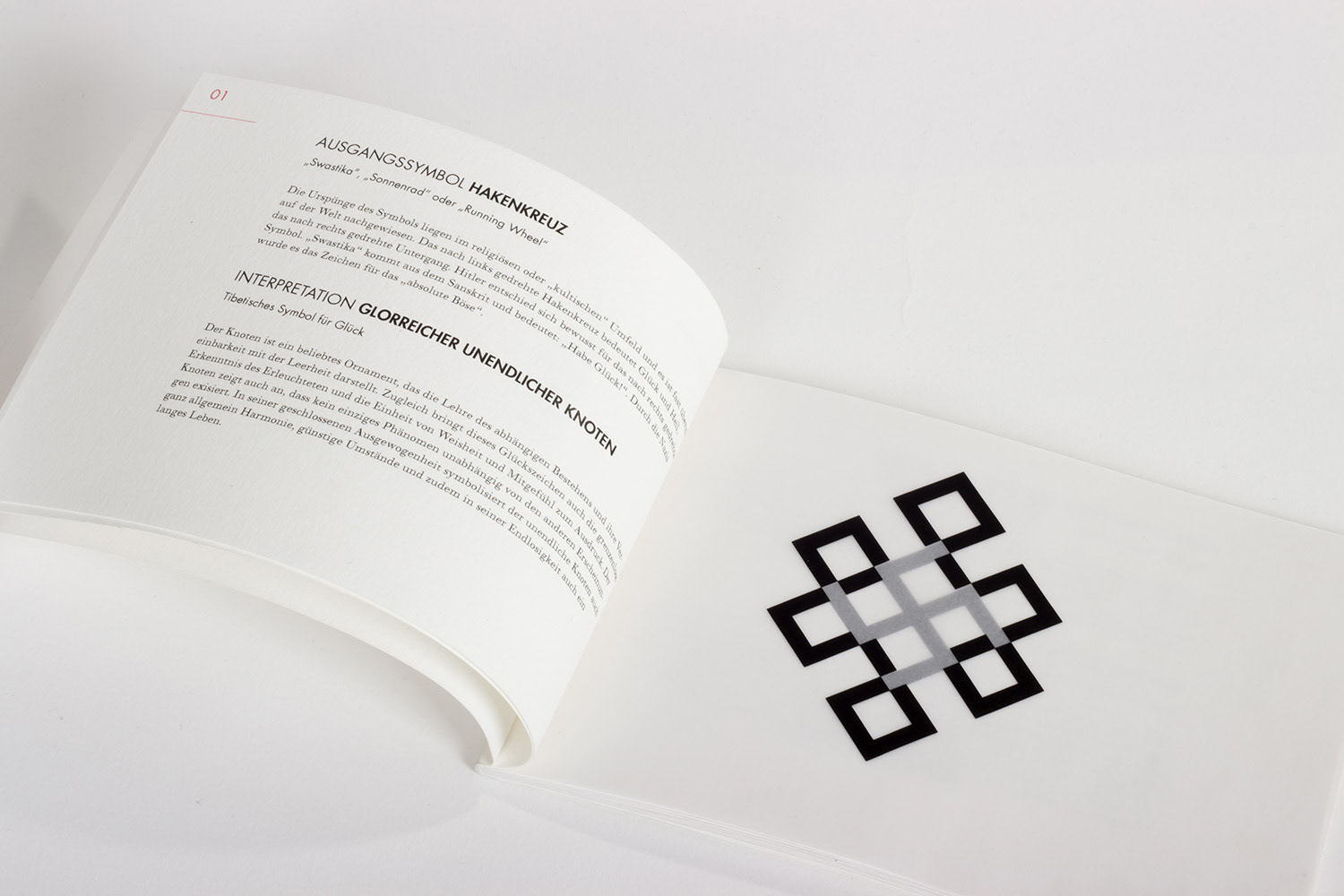 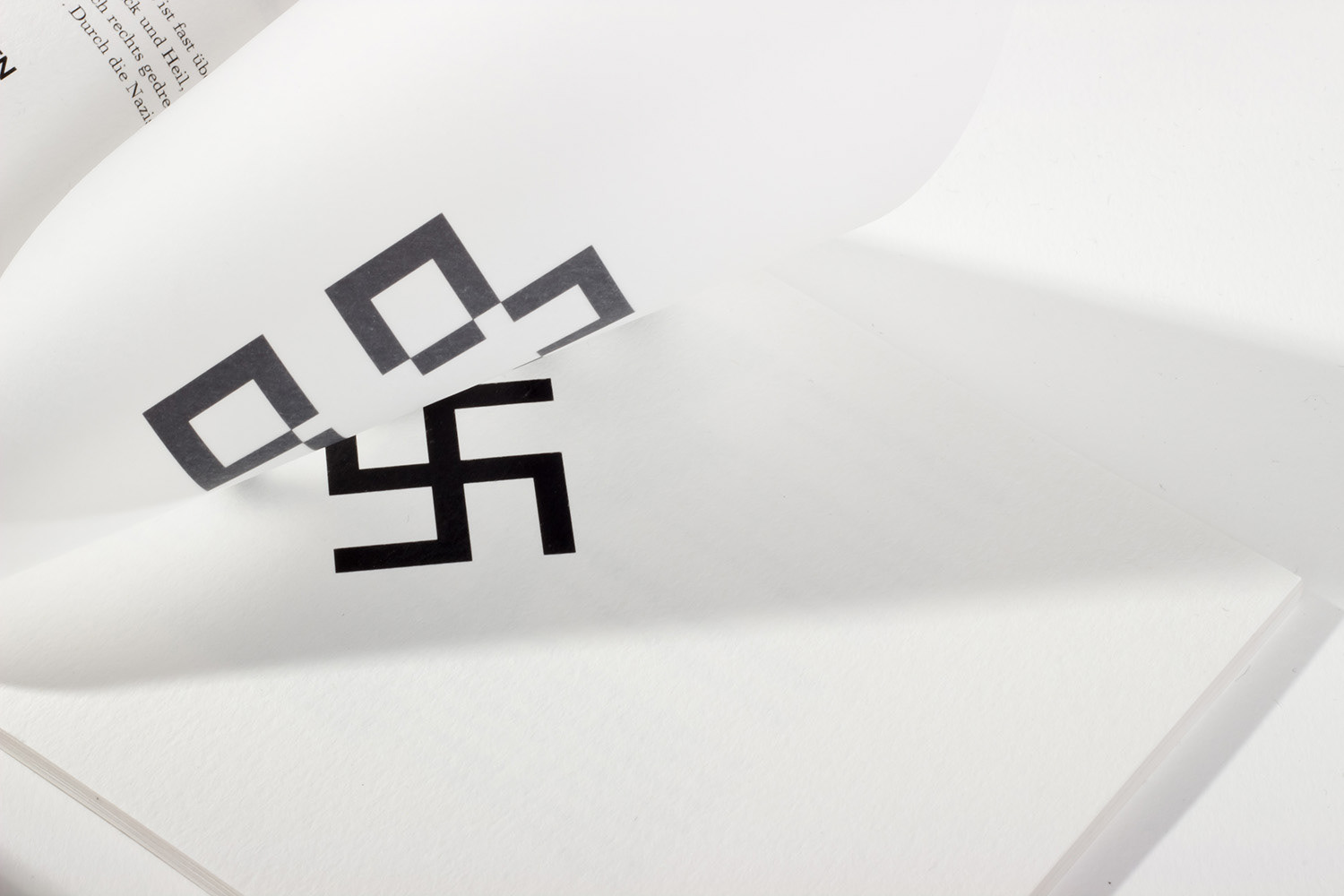 Initial Symbol: Swastika
The origins of this symbol are religious or "cultic". "Swastika" has its origin in Sanskrit and means: "lucky or auspicious object". The symbol can be found almost anywhere in the world. A swastika turned to the left side means fortune and hail, whereas the one turned right means doom. Hitler decided to use the right-turned symbol. Due to the Nazis' use, it became the symbol for the "absolute evil".
Interpretation: Endless knot
The endless knot is a popular Tibetan ornament signifying luck. It portrays the theory of dependent existence and the compatibility with the void. Likewise, this symbol of fortune brings endless insight of the enlightening, the unity of wisdom and empathy. The knot also shows that not a single phenomenon exists independently from other appearances. It also symbolises general harmony, favourable circumstances and, in its infinity, a long life.

Initial Symbol: SS Rune
The Sig-Rune stands for the consonant "S" in the Germanic alphabet. The original meaning is "sol" or "sun". At the beginning of the 20th century, the meaning changed to "Sig" which means "victory". The symbol was supposed to have an aura of strength and power, and was associated with violence, fight and death. In the Third Reich, the rune was the emblem for the SS, the so called "Schutzstaffel". In a simple form, it was the emblem of the "Deutsche Jungvolk".
Interpretation: Butterfly
For the indigenous Americans, the butterfly has different meanings. For some, it means change and renewing, beauty and vanity, fortune and joy. Some associate the butterfly with sleep and dreams. Children' beds were decorated with symbols of butterflies to bring pleasant dreams to the children. But essentially, it is a symbol for transformation and strength as well as the reincarnation and evolution of the soul. For the Indians, the butterfly is a totem animal called Kimimala.

Initial Symbol: Celtic Cross
This symbol has its origins in the Celtic culture of the British Islands and Ireland. Mostly, it is interpreted as the Celtic symbol of the sun, whereby Christian and pagan explanations are used as well. For Neo-Nazis, it is a symbol for the "supremacy of the white race" - mainly because of its optical similarity to a hairline cross.
Interpretation: Zia Symbol
Zia Pueblo is the birthplace of the ancient sun symbol. It is a stylised sun with four rays, which represent the four traditional directions. Around 1920, it was chosen to be the emblem for New Mexico's national flag. The circle symbolises the circle of life. The rays represent the four seasons (spring, summer, autumn, winter), the four phases of life (childhood, adolescence, adulthood, evening of life), the four cardinal directions (North, South, East, West) and the four parts of the day (morning, afternoon, evening, night).

Initial Symbol: Wolfsangel
The wolf trap is a tool which was first used in the 8th century. Until today, there is no certainty if it was used as a wall hook for stabilisation or for wolf hunting. The National Socialists used the symbol for adjutants of the Hitler Youth who wore the symbol on their sleeves. Additionally, it was supposed to express the ability of putting up a fight.
Interpretation: Funtunfunefu-Denkyemfunefu
This is the Adinkra symbol for democracy and unity. Adinkra is a series of symbols from the Ivory Coast and Ghana, which are found in all areas of life, e.g. clothing, walls of houses, pottery and wood wares. It shows Siamese crocodiles who share one stomach and therefore fight over food. It is a reminder that power plays and tribalism are harmful for everyone involved. It is a symbol for the unity of mankind despite cultural differences. Within a democratic community, everyone is supposed to work together to direct humanity's fate.

Initial Symbol: Odal Rune
Othala stands for dissociation of the unfamiliar, protection and privacy of one's residence. This rune therefore stands for the bond between relatives and the unity of a family. It also symbolises one's own identity. It derives from the syllable "Od" which means "property" or "heritage". In the Third Reich, it had multiple uses, as a symbol for "Blood and Soil".
Interpretation: Finger
This Berber symbol for protection can be found among cave paintings in North Africa. Berber symbols were used as expressions of everyday life and represent the relationship with nature. Sowing, harvest, veneration of the sun, moon, earth and stars form the symbolism of the Berbers from their cultural beginnings until today. They were used as aesthetic ornaments for protection against the evil eye and evil spirits. Many of these symbols have a deeper, spiritual meaning. The symbol's placement, either as a tattoo or a painting, is as important as its design.

Initial Symbol: Triskele
In its curved shape, the trivet was found in many early cultural circles as paintings on rocks in Ireland, ceramics in Greece and coins in Sicily, where it probably symbolises the sun. Esoterics see the triskele as a portrayal of birth, life and death. In the right-wing scene, the symbol is used in its curved and angular shape. It is interpreted as the three-armed swastika.
Interpretation: Little Flower of Life
It is a pre-stage of the "Flower of Life" and the centre of everything. The seven circles are also called the "egg of life" or the "seed of life". They symbolise the seven days of creation, as every circle stands for one day. Similarly, they stand for the seven directions, seven days of the week, seven chakras and gates of energy in one's body, the Pleiades etc. They also stand for blessing, protection and fertility, as well as the power to unfold and bloom from the core.

Initial Symbol: Tyr Rune
Tyr is the God of heavens and war and stands for glory and courage. It is the rune of balance and justice, which is ruled by a higher wisdom. It also means self-sacrifice, either for one self or for the well-being of society. Furthermore, it symbolises the act, fight and war and was used in the "Sturmabteilung" (SA) and the Hitler Youth as a badge of achievement.
Interpretation: Harth
Harth is a Reiki symbol of love, harmony, truth, balance and beauty. Reiki has Japanese origins and means "universal energy of life". Reiki is another expression for energy and breath of life which flows through every person. It also enforces natural self-healing. Harth means true love, true beauty and harmonious balance. It is a symbol for the heart and true love, as healing comes from the heart. The heart is a gate to higher abilities and it is a template for meditation.
↑Back to Top